Book One: Murder On The Menu 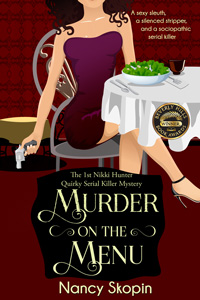 A sexy sleuth, a silenced stripper, and a sociopathic serial killer …

Murder On The Menu is available at Amazon – Kindle $3.99

My name is Nicoli Hunter. I know it sounds like a cliché, a private investigator named Hunter, but it’s not what you think. My father chose the name when he arrived at Ellis Island. It’s just a coincidence that I ended up making my living as a kind of hunter.

Most of my work involves bar and restaurant mystery shopping, although I do the odd insurance investigation and on rare occasions agree to follow unfaithful spouses. Tonight my friend Elizabeth and I were dining and barhopping at the expense of four of my regular clients. We’d started our evening at a Microbrewery in the Union Square area of San Francisco, and had worked our way around the city.

At the moment we were standing in the lobby of a somewhat famous eatery on Montgomery Street. We were both slightly underdressed for this establishment, and the hostess (read queen bitch) was studiously ignoring us. This is part of the plan for many of my clients. They want to know how their employees behave when management isn’t onsite.

After waiting almost five minutes to be noticed, I approached the desk and asked the QB in my sweetest tone of voice if we could be seated. She looked me up and down, and replied with the expected, “Do you have a reservation?”

“Of course,” I responded. “Nicoli Sinclair, for eight o’clock.”

She made a show of reading the reservations ledger, then picked up two menus and showed us to a table directly outside the kitchen. Perfect, for my purposes at least. Every detail of each employee’s behavior would go into my report for the owner, not to mention the quality of the cuisine, the temperament of the crowd, copious notes regarding the condition and cleanliness of the establishment. You get the idea; attention to detail is critical.

Elizabeth looked around the room, trying not to stare at the rich and famous patrons while I observed the staff. Waiters were milling about taking orders and checking on customers who had already been served. It was still early in the survey, but at this point it appeared that the only fly in the soup was the hostess.

We were approached by a young man in black tie, minus the jacket, who, after introducing himself as Brad, asked if we’d like anything from the bar. Brad must be a new hire. I didn’t recognize him from previous surveys.

“I’d like a glass of something red. What would you recommend?”

Brad produced a wine list and asked a few pointed questions to help him narrow it down for me. “Do you prefer light, fruity, meaty…?”

I smiled at his etiquette and said, “The meatier the better.”

Brad made his recommendation and I acquiesced. He turned to Elizabeth who ordered a tall Mudslide. Brad hid a grin and said, “Very good, ladies,” before departing for the bar.

I momentarily turned my attention to my best friend, Elizabeth Gaultier. We’d met two years ago when I moved aboard my yacht and opened my PI office in the marina complex where we both currently live. She’s a pixie with a stratospheric IQ, just over five feet tall with strawberry blonde hair, a curvy figure, and a very slight accent left over from her childhood in New Orleans. Elizabeth is a walking paradox. She’s brilliant (though she insists she’s nothing special), outspoken to a fault yet incredibly kind and generous, and has a bawdy streak a mile wide. All attributes, in my opinion. She’s currently single, as am I, which is why she has time to occasionally accompany me on these little ‘shopping’ expeditions.

Brad returned and served our drinks, expectantly watching our faces as we each tried a sip. The wine he’d selected for me was exceptional. A combination of black currant and bell pepper notes, it was so dense I almost had to chew.

“Is it satisfactory, madam?”

He turned his inquisitive gaze toward Elizabeth who smiled around her straw and said simply, “Yummy.”

Brad nodded politely, but his eyes were twinkling. Most men twinkle at Elizabeth.

“Would you like to hear this evening’s specials?” he asked.

We listened attentively to the specials, (at least I did, since Elizabeth was people watching again), and ordered. As Brad departed I felt my cell phone vibrate in my purse.

“Shit. Who calls a PI after eight o’clock on a Wednesday?” I muttered as I pulled the Nokia from my bag. I didn’t recognize the number, but since it might be important I trotted into the hallway outside the restrooms rather than committing a major faux pas by answering at the table.

“My name is Kate Howard.”

I recognized her name instantly. Kate’s daughter, Laura, had been killed two weeks earlier. I’d been following the story on the evening news. Laura’s body had been found behind a dumpster on Bay Road, less than two miles from my office. According to the news reports, no persons of interest had yet been identified by the police.

Finally something more challenging than catching till-tapping bartenders. I grabbed the pen and notebook I keep in my purse as Kate spoke.

“I’d like to hire you to investigate Laura’s murder,” she said. Her voice was a soft monotone, which is often the case when people are in shock. “The police won’t tell me anything, except that they don’t have any suspects yet, and that is not acceptable.”

“I can imagine how you must feel,” I said, although of course I couldn’t. “Why don’t you come to the office tomorrow so we can talk about it in person.”

Kate and I scheduled an appointment for the following morning and I gave her directions to my office in the marina complex. I slipped my phone and notebook back into my purse and returned to the table just as our Caesar salads were being served.

“You won’t believe this,” I whispered. “Holy shit, I don’t believe this. Someone wants me to investigate a homicide. Have you heard about Laura Howard’s murder on the news?”

Elizabeth stopped with her salad fork halfway to her mouth and nodded.

“That was Kate Howard, Laura’s mom, on the phone. She’s coming into the office tomorrow.”

I entered the appointment in my PDA, then set my excitement about the new case aside so I could focus on the meal and the service.

The Caesar salad was the perfect combination of fresh greens, croutons, and anchovies, served with a piquant dressing which had been prepared at the table. My coulotte steak was so tender I could cut it with a fork, and the bordeaux reduction sauce contained diced morel mushrooms. I closed my eyes as the medley of flavors hit my tongue and almost had an orgasm. Elizabeth was very happy with her stuffed lamb chops, and we were both delighted with Brad. He was attentive without hovering, and absolutely charming.

When he delivered the check, in a black leather folder on a silver tray, I was ready to insert my credit card when I noticed something was amiss. The folder contained a time stamped register receipt, but it showed that it had been printed at 7:42 p.m. It was now almost 10:00 p.m. My steak and the two Caesar salads were listed, but rather than showing Elizabeth’s stuffed lamb chops, the second entrée listed was frog’s legs. The wine shown on the receipt wasn’t what I had ordered, and the tall mudslide wasn’t on the receipt at all. Brad had apparently held onto someone else’s receipt and was reusing it, so that our meal would not be recorded on the register. I tucked my credit card back in my wallet and slid a stack of cash into the folder instead.

When Brad returned with my change I pocketed the bogus receipt and left a tip in the folder. I was disappointed by my discovery. Brad was a really good waiter and he’d lose his job over this. Not that he didn’t deserve to lose his job, but I wasn’t looking forward to being there when it happened and sitting in on termination interviews is part of my standard protocol. Fortunately, most people are so embarrassed about being caught and so relieved that they aren’t being arrested, they never mention my identity and profession to their former coworkers.

We completed the bar survey in record time, and decided to call it a night.

Elizabeth was in a Mudslide stupor on the way home, so I shifted my focus back to Kate Howard. The police were probably already doing everything possible to investigate Laura’s murder, and I might be wasting my time if I took the case. I dislike wasting time. I am not among those fortunate individuals who can relax and allow life to happen while they placidly observe, although learning how to placidly observe is on my long list of things to do. Nevertheless, it sounded so much more interesting than anything else I was working on at the moment. The most excitement I’d had in several months involved videotaping a chef who was stealing frozen calamari from his employer. The Howard case would give me an opportunity to expand my area of expertise. Besides, this woman had lost her child. I couldn’t just turn her away.

What if, I thought, the detectives working the case were incompetent? Or what if they just didn’t care? It could happen. How much death and destruction can one individual absorb before becoming desensitized? I would listen to what Kate had to say with an open mind, and perhaps even speak with the RCPD homicide detectives handling the investigation, before making a decision.

Murder On The Menu is available at Amazon – Kindle $3.99