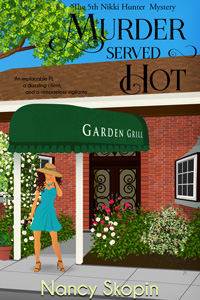 An implacable PI, a dazzling client, and a remorseless vigilante …

“I’d like to tell you a little bit about myself,” Brooke Evans began, “so you’ll understand the choices I’ve made.”

“I’ve always been attracted to bad boys. You know the type. Slightly dangerous, extremely macho, emotionally distant. Most of them are assholes. The last guy I dated was a major jerk. After we’d been seeing each other for a few months he tried to get me to have a three-way with him and another woman. We got back to his place after dinner one night and he said he had a surprise for me. There was a naked woman in his bed, waiting for us. She was really slutty-looking too. Probably a prostitute.

“I’d had a lot to drink, but I wasn’t that drunk. I said no and tried to leave, but he wouldn’t let me. He hit me in the face and threw me down on the bed. Then he made me watch while he screwed her. I guess he thought it would make me hot or something, but it was disgusting. I managed to get out the door and that was it for me. No more bad boys. I decided to look for someone nice. A month later I met Stanley. He’s a CPA. He did my taxes. Who could be more harmless than an accountant, right?”

I was dumbfounded. I motioned for her to go on.

“Stanley and I have been dating for eleven months now, since March, and last week he asked me to marry him. I was kind of surprised because we’ve never even had sex. I think he’s old fashioned, you know, and wants to wait until we’re married. Anyway, ever since he proposed he’s been acting really weird. He wants to know where I am all the time, my apartment has to be spotless, and he makes me get on the scale every time I see him. If I gain an ounce, or I’m even a minute late when we’re going out, he gets upset.

“At first I thought it was kind of cute and quirky. But now I think maybe he has that obsessive compulsive thing. OCD? Stanley says ‘You have to establish strict control over everything in your life in order to maintain balance.’ I guess that kind of makes sense, but it’s getting old, if you know what I mean. He makes me carry a pager, and I think he might be having me followed. He’s a very sweet guy, but I’m beginning to think marrying him might be a mistake.”

I’d never missed an episode of Monk, when it was on TV, and immediately flashed on the OCD Detective’s relationship with his wife, Trudy. I was tempted to ask if Stanley ever kissed her or held her hand, but I didn’t think it was any of my business at this point.

“I usually work alone,” I said. “If you want Stanley followed at the same time as I’m tailing you, I’ll have to bring in an associate or two. This is going to be expensive.”

“I have money. My parents passed away two years ago. They were very well off, and they had a huge life insurance policy. I was an only child.”

Brooke took the notepad I handed her and wrote down her social security number. “I don’t know Stanley’s,” she said. “And I’ve never even seen his driver’s license. I can give you his date of birth and his address.”

She wrote the info on the notepad and handed it back to me. Stanley’s last name was Godard. “This is his home address,” she said, pointing to a line she’d written on the notepad, “And this is his office.”

“That’s a start. But try to get a look at his driver’s license for me. I can’t do a background check without either that or his social security number.”

Brooke was a strikingly beautiful woman in her early thirties. Aristocratic features, intelligent brown eyes, a radiant complexion, and lustrous brown hair with subtle blonde highlights. She had a well-toned body, which was evident because she was wearing shorts and a tank top. It was late February, but spring had hit the California coast early and it was already seventy-three degrees outside. Brooke also had a subtle drawl. The whole package brought to mind the quintessential Southern belle.

My name is Nicoli Hunter. I’m a private investigator licensed to practice in the state of California. My office is in Redwood City, in a marina complex where I also live aboard my forty-two foot Cheoy Lee Motorsailer, Turning Point. I’ve been a PI for almost three years now, not counting the two years I spent in training. I’m thirty-six, five foot seven, and a hundred and thirty-four pounds, with long chestnut-brown hair and dark blue eyes. I’m no slouch in the looks department, but Brooke almost made me feel plain.

“Do you have a photograph of Stanley?” I asked.

She withdrew her wallet from her Chloe shoulder bag and flipped it open. Removing a small picture from one of the compartments, she hesitated before giving it to me.

“Can you make a copy of this?” she asked. “It’s the only one I have, and I’m afraid he’ll notice if it’s missing.”

“He keeps track of what’s in your wallet?” I asked.

She handed over the photo and I slipped it into my color scanner. While I was running the scan application I told her my hourly rate.

“If I bring in another PI, I’ll also be charging you for their time and expenses. I’ll need a deposit to get things started.”

I saved and printed the scanned picture and handed her the photo. Brooke slid the picture back into her wallet and took out her checkbook.

“How much do you need?” she asked.

I did some quick calculations in my head, adding up my time and that of a colleague, mileage, and the expense of the background checks.

“If you want someone to watch both you and Stanley twenty-four hours a day, the first week will cost you around thirty-four thousand. Twenty thousand if you only want to be followed during daylight hours.”

“Can you follow me from when I get off work until, say, midnight? And watch Stanley during the day?”

She wrote me a check for thirty thousand dollars and placed it on my desk blotter. I picked it up.

“Is this your current address?”

“Yes. My home phone number is on there too.”

I filled in the blanks on my standard contract and printed two copies. Brooke didn’t even read it before signing on the dotted line. I signed a copy and held it out to her.

“Brooke, this is none of my business, but if you’re so nervous around Stanley, why are you still seeing him?”

“He’s not a bad guy. He’s just been a little strange since he proposed. Maybe the idea of marriage is stressing him out.”

“Did you accept his proposal?”

“Oh. Not exactly. I said I wanted to think about it.”

“Maybe that’s what’s stressing him out.”

“You think?” she asked, hopefully.

“When are you going to see him again?”

“Tonight. We always go out on Friday night. Always to the same restaurant. The Garden Grill, in Menlo Park. Do you know it?”

I nodded. I knew the Garden Grill and its owner, Jessica James, quite well. Jessica and I had worked together years ago, when I was still in retail security management, and she was one of my first clients when I got my PI license.

“You go there every Friday?”

“Yes, and we always sit at the same table. Stanley likes routine.”

“The one in the tiny room with the glass ceiling, under the oak tree.”

“Really? That’s my favorite table too.” Small world. “What time is your reservation?”

I asked Brooke where she worked and she said she was the Cosmetics Department Manager at the Stanford Neiman Marcus. She worked from 10:00 to 6:00, Monday through Friday. I wondered if she would let me use her employee’s discount.