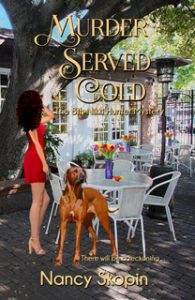 There will be a reckoning..

The big man followed the blonde into an alley. He moved slowly and silently, keeping to the shadows and wondering why he had taken another case from a client he didn’t even like. He silently vowed that this would be the last time. Lyndon could find someone else to do his dirty work.

Scanning the alleyway, he was unable to locate the subject. She was probably hiding behind one of the dumpsters, waiting for him to leave. This one was smart. Not Lyndon’s usual type at all. The idiot had been dating her for three weeks and the only details he had to offer were her name, her phone number, and the gym where they both worked out. No date of birth. No home address. No place of employment.

The big man stopped and shook his head, trying to clear his vision, and noticed a tingling sensation around his lips. His tongue felt thick and he recognized the beginnings of a headache. Maybe he was coming down with something. He searched his memory for recent news reports of viral outbreaks, but found he was having trouble concentrating. Just get this damn job over with and go home. He would tell Lyndon his new girlfriend was seeing another man and call it good. Hell, maybe it was time to retire.

As he stepped forward again, edging toward one of the dumpsters, he sensed rather than heard movement behind him and felt a sharp, piercing pain to the back of his head. He fell to his knees and his stomach roiled, emptying its contents on the ground. “I’m in trouble,”

My name is Nicoli Hunter. I’m a licensed Private Investigator working out of a ground floor corner office in the marina complex where I live aboard my yacht. The marina is located in Redwood City, twenty-five miles south of San Francisco. I specialize in covert bar and restaurant surveillance, also known as mystery shopping. I also handle the odd insurance fraud case and, occasionally, I get involved in a homicide investigation.

I’m thirty-six years old, five feet seven inches tall, and weigh a hundred and thirty-five pounds at the moment, thanks to frequent visits to the gym. My hair is long, curly, and chestnut brown. My eyes are ocean-blue with black rims around the irises, one of the few things I inherited from my father the Cossack.

It was 9:30 on a Wednesday morning in early August, already hot and humid even at this hour, and the tension in my office was running as high as the thermometer tacked up outside my door. One of my visitors’ chairs was currently occupied by my friend, and favorite client, Jessica James. Today, however, Jessica wasn’t here to talk about scheduling surveys for one of her restaurants. This time she wanted me to investigate K-9 Contentment, a doggie daycare center she was about to purchase. That wouldn’t have been a problem for me, but Jessica had proposed that my dog, Buddy, be enrolled at the aforementioned daycare center as an undercover agent.

Nothing in the world could make me risk Buddy’s well-being. The fact that Jessica “had a feeling” something was amiss with the training or conduct of the employees at the center was irrelevant. As fond of her as I am, our relationship doesn’t hold a candle to the bond I share with my dog. I “had a feeling” too. My feeling was that this was a bad idea. Actually, I’d woken up with an odd sense of dread this morning, hours before I’d learned what Jessica wanted me, and Buddy, to do.

“Why don’t you enroll one of your dogs?”

Jessica breeds Norfolk terriers. She has three of them living with her at the moment, so I didn’t understand why Buddy had to be the one to take on this assignment.

“They know me,” she said. “I’m in negotiations to buy the place, so I’ve been out there a couple of times touring the facility and going over profit and loss statements.”

“Okay. How about I make an appointment to enroll one of your dogs?”

“You’d have to prove ownership. You wouldn’t even make it past the interview process.”

“There’s an interview process?” I asked, taken aback. This was getting more complicated by the second.

“Of course. They don’t take just any dog, and they have to approve the owners as well. They may even run a background check on you and Buddy before letting you apply.”

“It sounds more like a country club than a canine daycare facility. Doesn’t matter. I’m not putting Buddy at risk.”

“There is no risk. It won’t be dangerous. All you have to do is fit him with a collar camera and get him inside for a couple of days.”

“Days? No way! If you’re right about misconduct among the staff members,

that means all the dogs in their care are at risk. Besides, Buddy suffers from separation anxiety. I almost never leave him alone.”

“He won’t be alone. He’ll be with a dozen other dogs his size and two or three attendants. He’ll be fine.”

“How about a compromise. I’ll take him with me for an interview and we’ll get a look around. That’s my best offer.”

“If you make it through the interview, and that’s a big if, then you leave him there for one full day.”

What the hell had I just agreed to? I didn’t want to do this at all!

“By the way,” she said, changing the subject before I could back out. “I need a dinner survey at the Garden Grill tonight if you can squeeze it into your schedule. I hired a new server.”

“You hired a server without letting me run a background check?”

“It was an emergency. Jaime’s wife had the baby a month early.”

“I didn’t even know he was married. Is the baby okay?” Jaime was my favorite server at the Garden Grill. I’d praised him in countless surveys, but knew nothing about his personal life.

“She’s fine. A little underweight, but her lungs are fully developed. The little angel wails like a banshee. They named her Jessica.”

Her eyes started to get misty, and I handed her a tissue from the box on my desk.

“Let me check,” I said, opening the Excel workbook I use to schedule restaurant and bar surveys. “What hours is the new server working?”

“I can fit in a dinner survey at five-thirty. Will that work for you?”

“Absolutely.” She blew her nose noisily and tossed the tissue in the waste basket. “Thank you, Nikki.”

“No problem.” I added the Garden Grill to my schedule, then picked up a notepad from my desk. “What’s the new server’s name? I’ll request a background report.”

“Her name is Sherry Troop. She’s been a regular customer for a few years and recently retired from her career as a special education teacher. I think she’s finding retirement a bit boring. Last month when she came in for lunch she filled out an application. We didn’t need anyone at the time, but when Jaime’s wife went into labor I gave her a call. She’s been working out great so far, and I really like her, but I want an objective opinion.”

Jessica laughed. “I’ll call you with that when I get back to the restaurant.”